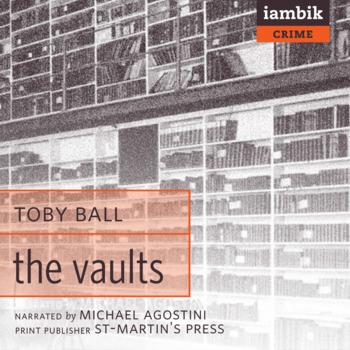 In a dystopian 1930s America, a chilling series of events leads three men down a path to uncover their city’s darkest secret.

At the height of the most corrupt administration in the City’s history, a mysterious duplicate file is discovered deep within the Vaults—a cavernous hall containing all of the municipal criminal justice records of the last seventy years. From here, the story follows: Arthur Puskis, the Vault’s sole, hermit-like archivist with an almost mystical faith in a system to which he has devoted his life; Frank Frings, a high-profile investigative journalist with a self-medicating reefer habit; and Ethan Poole, a socialist private eye with a penchant for blackmail.

All three men will undertake their own investigations into the dark past and uncertain future of the City—calling into question whether their most basic beliefs can be maintained in a climate of overwhelming corruption and conspiracy.

The Department’s paper supplier for years had been Ribisi & Porfiro.

Narrated by Michael Agostini for Iambik Audiobooks, the recording takes on a fittingly dark, Gotham-esque tone. [...] Agostini brings the isolation of this character to life in his personification.

“Set in an unnamed U.S. big city in 1935, Ball’s impressive thriller debut opens with a vivid description of “the Vaults,” where archivist Arthur Puskis has worked for almost three decades. He’s the only person who understands the system of filing criminal cases in the vast underground storage facility in the subbasement of city hall. When Puskis, amid the drudgery of his lonely job, discovers two files with the same alphanumeric identifier but with different contents, the implications threaten the foundations of the massively corrupt municipal government headed by Mayor Red Henry. In particular, the find raises questions about why a number of convicted killers were never actually incarcerated. The archivist’s dogged legwork coincides with a series of bombings aimed at close allies of the mayor, and the plot steamrolls to a dramatic conclusion. Ball’s “City,” in which despair and graft are almost palpable, is an imaginative achievement on a par with Loren Estleman’s Gas City.” - Publishers Weekly (starred review) - Read More

The Angel of Terror

Beautiful Jean Briggerland is the epitome of evilness in this fast-paced thriller. Her many plots to steal her victim’s riches do not shy away from lies and murder. Only Jack Glover, the lawyer of Jean’s most recent victim, is aware … Continue reading →

From swinging Kansas City of the ’30s to the grit of today’s Glasgow, the heroes and heroines of our newest Crime Fiction take you to the dirtier side of histories real and imagined. In this collection, redemption takes all shapes, … Continue reading →

Frank Coffin had been a well-respected Baltimore homicide detective. But when he started having panic attacks at crime scenes, he was forced to go home to Cape Cod, where the worst crimes were usually break-ins, bicycle thefts, and domestic disputes. … Continue reading →

Halfway around the world, war has begun, but for Dorie Lennox, a newly-minted private eye on her first tail, danger is more immediate. The dark streets of Kansas City of 1939 offer swing music, fast cars, gangsters, and the chance … Continue reading →