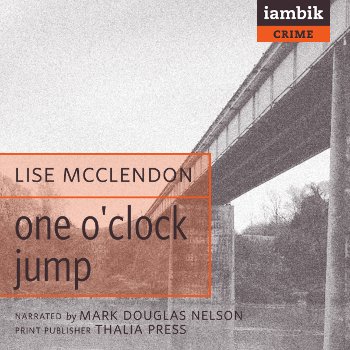 Halfway around the world, war has begun, but for Dorie Lennox, a newly-minted private eye on her first tail, danger is more immediate. The dark streets of Kansas City of 1939 offer swing music, fast cars, gangsters, and the chance to forget about the Depression and her own murky past. But first she must conquer her fears and save a woman on a bridge high above the muddy Missouri. Dorie is thrown into a quickly unraveling scam that offers salvation to few — and misery to plenty — in the high stakes world of machine politics and desperation deals.

With vivid prose and sharp dialogue, the world of Dorie Lennox comes alive, behind the wheel of her Packard in jazz-age Kansas City. The landscape of America and the homefront of World War II are evoked in a thoughtful mystery that lingers for the force of characters and keen sharpness of a slice of history seen through the perceptive, compassionate eyes of Dorie Lennox.

Inside the plate-glass window of the Hot Cha Cha Club, the bar girl was taking off her apron.

Segueing neatly from the ski slopes of contemporary Wyoming (1999's Nordic Nights) to the Kansas City of Count Basie and FDR's fireside chats, McClendon debuts an excellent historical series, with evocative period dialogue and a story line full of surprises. Iris Jackson is a woman with a secret, but not for long. PI Dorie Lennox, hired to tail the meatpacker's "bar girl," thinks her first solo job is over when Iris jumps into the Missouri River, but this is just the beginning. [...] With little to go on, Dorie follows what leads she has straight into a web of false identities, cover-ups and fraud. -- Publishers Weekly

A convincing re-creation of time, place, and a hard-nosed, emotionally scarred heroine; for all collections. -- Library Journal

McClendon plays the World War II swing era for all its worth (Count Basie makes a cameo), and the switchblade-packing Lennox displays plenty of grit in that pants-wearing, Rosie the Riveter kind of way. Sundry subplots, involving Lennox's troubled past and romantic misadventures, as well as the melancholy ramblings of her mustard-gassed employer, prove more distracting than character building, but overall, this is a solidly put together, reasonably evocative period piece. -- Booklist

Storm’s Heart is a sexy, sophisticated romance with a dark, brooding centre. When Greek lawyer Andreas Lazarides and bistro-manager Kizzy Dean clash over the executing of his mother’s final wishes, he takes matters into his own hands and Kizzy back … Continue reading →

Sweet and Lowdown is the second book of the Doris Lennox Mysteries. Europe is at War. Nazi bombers are hammering London. Wendell Willkie is giving Roosevelt a run for his money. In Kansas City, Dorie Lennox and her partner Amos Haddam … Continue reading →

Miss Kinue Nomura survived World War II only to be murdered in Tokyo, her severed limbs left behind. Gone is that part of her that bore one of the most beautiful full-body tattoos ever rendered by her late father. Kenzo … Continue reading →