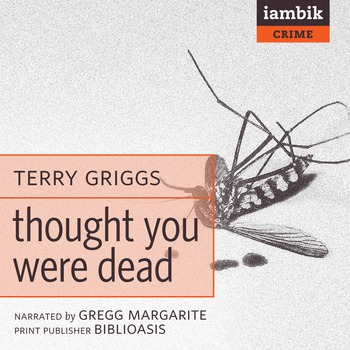 Thought You Were Dead

Meet the Perfect Man…no, no he’s not the hero of Thought You Were Dead. That would be Chellis Beith, literary researcher, slacker, reluctant detective, and a man bedeviled by every woman in his life. There’s his lost love, Elaine Champion, a now happily married inventor who uses him for market research, his best friend’s dotty ex-wife, Moe, his two vanished mothers, and his menacing boss, Athena Havlock, a celebrated writer who herself becomes embroiled in the dark side of fiction. The humour is wild, the language a thrill, the mystery within marvelously deft and daft. And as for the Perfect Man… well, nothing is as it seems. Is it? Thought You Were Dead is the most unconventional of all murder mysteries, turning the genre completely on its head, by bludgeoning flat language and Puritanical sensibilities with evident glee. This is further evidence that Terry Griggs is sui generis: an original and completely inimitable literary voice, with an eye for the cinematic.

The doghouse that Chellis currently found himself in was meant for a much smaller doggie, a bad pup the size of Bunion or Hormone.

Thought You Were Dead takes chances, bends rules, and breaks the mold. Instead of inviting the reader to race the protagonist to assemble clues and solve the crime, Griggs forces us to wait along with everyone else to discover if there has been any crime at all. Fortunately, everyone here is a great pleasure to wander with, and the trip goes quickly. -- Rob Mrkonich, Harvard Book Review - Read More

... [B]reakneck pacing and absurdist plot developments, which include the appearance of a very unconventional weapon near the book’s close. Griggs’s finest joke lies in her decision to set her novel in the publishing industry, which allows her to riff on tacky book covers and take aim at everyone from aspiring writers to copy editors to a lowly book reviewer who meets an untimely demise. -- Lee Ferguson, CBC Arts & Entertainment - Read More

This collection includes all the titles from our second release of Crime books. Titles: – Hard Cold Whisper by Michael Hemmingson – Listen to the Dead by Randall Peffer – The Painted Messiah by Craig Smith – Richmond Noir by … Continue reading →

Around the World in Stilettos

Twenty Three year old Sophie Farrier has everything a girl could want; the perfect job, the perfect flat and the perfect set of friends. As a travel writer, Sophie gets to fly around the world, meet new people, see new … Continue reading →

David Kellgren is a process server, a job where everyone wants to kill the messenger and things can get a little bit dangerous and out of hand. David is attacked when trying to serve legal papers to a gang member … Continue reading →