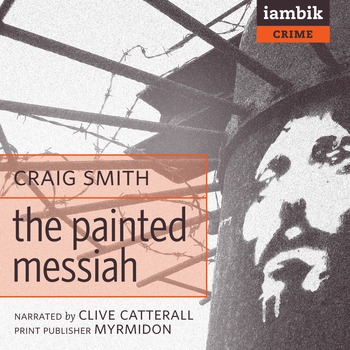 The Painted Messiah combines a blistering action thriller set in the streets of Zurich and on the lakes and wooded slopes of Switzerland with a compulsive and convincing account of first century Romano-Judaean politics and the real reason for Pontius Pilate’s condemnation and execution of Christ.

A legend persists that, after the ‘scourging’, Pilate commanded that his victim be painted from life. Somewhere, the painting survives, the only true image of Christ, granting the gift of everlasting life to whoever possesses it.

Kate Kenyon, the wealthy young widow of an English aristocrat killed on a Swiss mountain, has an addiction to mortal risk. She feeds it by engaging in the armed robbery of priceless artefacts with her accomplice and lover Ethan Brand, a Tennessean who owns a bookshop in Zurich. Their latest target is a priceless ‘Byzantine’ icon hidden in the tower of a chateau by Lake Lucerne. So far they have never had to shoot anyone. This time will be different.

Thomas Malloy is a retired CIA man looking for his first lucrative freelance assignment. His chance comes with a presidential favour to a rich but ailing televangelist. Malloy’s task seems simple enough: pick up the preacher’s newly acquired painting from a Zurich bank and get it to the airport. But, once in Switzerland, Malloy’s old friend, the enigmatic Contessa Claudia de Medici tries to warn him off his mission.

Sir Julian Corbeau is an international criminal holed up in Switzerland to avoid US extradition proceedings. He is also the sadistic head of the modern Knights Templar. He had the painting and now he desperately wants it back as well as to wreak a bloody revenge upon those who stole it. As the contenders vie for possession the bullets fly, the body count rises and the secrets of the portrait gradually unfold. We learn how and why it came to be painted and how an object depicting the Light of the World could exert such a baleful and malignant influence on those who possess it.

‘Will those who have seen him in life know him by this portrait, Theophanes?’

'I got paper friction burns on my fingers and pressure sores elsewhere because I could barely move until I'd finished it. Things were so tense that at several points I had to remind myself to breathe.' Dovegreyreader's literary blog'A marvellously thrilling book ... the distinction between villain and hero is constantly blurred... a most enthralling story.' Paul Doherty, author of the Hugh Corbett mysteries

‘Things were so tense that at several points I had to remind myself to breathe.’ Dove Grey Reader