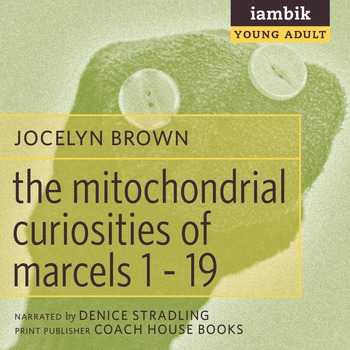 The Mitochondrial Curiosities of Marcels 1 to 19

Her hands lay inert and upturned on her lap – probably stunned, she thinks, by the hideousness of the skirt underneath them. Centre seam puckered, zipper mangled, it’s handmade in a way that makes people say, ‘Did you sew that yourself?’ when they mean, ‘How can you wear that thing?’ But she made it the day after he died, and she talked to him in her head the whole time. Which is why it looks like hell and why she had to wear it anyway.

Biology is not Dree’s thing. Equally heinous are English, Social Studies, her sister and mother, not to mention Edmonton in general. Toronto is where she belongs — specifically the upcoming Renegade Craft Fair.

Mercifully, escape is imminent: on her fifteenth birthday, she will get the special fund her father promised, and the day after that, she’ll be on WestJet Flight 233 to Toronto. Instead, her dad has a fatal heart attack, and all she finds are clues leading to the ominous Alberta Psychiatric Hospital where her parents once worked.

Along the way: two fires, a family scandal, nineteen sassy sock creatures named Marcel, a new friend, a mystery, a stepmother who’s maybe sympathetic after all, the unceasing misery of school and the search for a proper way to grieve a father.

We miss the bus.

Jocelyn Brown’s The Mitochondrial Curiosities of Marcels 1-19 sports a title you’ll not soon forget, and a protagonist who challenges your patience while easily winning your affection ... a literary ride of such chaotic honesty that it could only happen in the hands of a teenager created by a very talented writer who gets that sometimes you just have to hold on tight as events carry you on, and you always have to take a chance if you want to change your life ... Major points to Brown for such a wildly inventive title that manages to be fantastic without straying into the realm of fantasy. --Colleen Mondor, Bookslut

The story crescendos with grief and crocheting, yet despite the cavorting high notes, manages to suffuse sufficient low notes so that sadness nests beside a pain in the reader's left lung from laughing so hard ... This is a novel where even the secondary characters rebound off the page with the immediacy of a just-pumped ball ... Brown's prose is astonishing. --Anakana Schofield, The Vancouver Sun

In this debut, though, Jocelyn Brown transcends the genre with a novel of depth and texture, rich with incident and very contemporary dialogue. She takes her readers deep into the complicated psyche of her narrator and heroine (yes, that's the right word), which is, as it turns out, exactly where her readers will want to be, richocheting from one OMG to another, in the thrall of this wonderfully original character's navigation of life without her father. --Susan Perren, The Globe and Mail