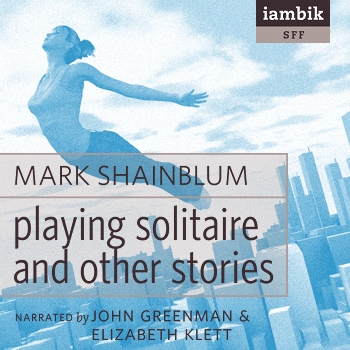 Playing Solitaire and Other Stories

Playing Solitaire
Rachel Steinberg was just a nice Jewish girl from suburban Montreal. She was never really Solitaire. She never asked for superhuman powers, nor the relentless, grinding cycle of violence and alienation that came with them. Rachel allowed herself a glimmer of hope when Carl said he loved her, when he swore up and down that her secrets didn’t scare him. But that was before he saw her glowing like the north star, before he ran in terror just like everyone before him.

Probably not the ideal moment for an omnipotent, 3000-year-old evil slumbering under the Island of Montreal to awaken and wonder what it should do first.

The Art of Solitude®
Mary-Ann became desperate when her history-player boyfriend took up bartending. Nobody with a scintilla of self-respect drank alcohol anymore, it was just so… so… industrial. Not only was Quent turning their dogs into alcoholics and their apartment into a seedy dive, he was getting in the way of her art. Something had to give, and in this case, it was the laws of physics. Mary-Ann purchased a top-of-the-line Solitude® fold-heart, and retreated to her own private universe to paint in peace. What could possibly disturb her there?

The Break Inspector
Missouri dirt-farmer John Gray had never regretted a kind act in his life, although truth be told, he would have had little enough to regret in any one of his fifty-five years. But oh how he wished the milk of human kindness had been completely drained from him that terrible, cursed night. With every fiber of his being, with every drop of blood in his body, John Gray wished he had never found the mysterious stranger on his prairie.

The Break Inspector is an unofficial sequel to Mark Twain’s “A Murder, a Mystery and a Marriage,” and a top-ten finalist in the International Mark Twain Writing Competition, 2001.

Her name was not Solitaire, but Solitaire would do for the moment. For lack of something better.

"People have argued that it will be impossible to imagine what life would be like on the other side of a Singularity because humanity will be so fundamentally altered as to not even be human anymore. But that doesn't mean we shouldn't try. Especially if it gives us excellent tales like 'The Art of Solitude®'". - James Palmer, Tangent Online

From Dark Places is a collection of dark short stories. Abby finds a creative solution to her father’s problems. Ben makes a pact with the Devil for a new Mum. Katie is pursued by unrelenting voices. John just found his … Continue reading →

Jennifer Pelland’s new brilliant collection of short stories. Pain. Pleasure. The sensation of touch…we feel everything through our skin, that delicate membrane separating “I” from “other,” protecting the very essence of self. Until it breaks. Or changes. Or burns. What … Continue reading →