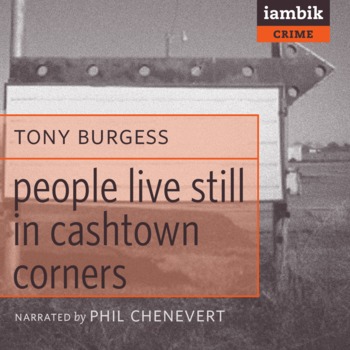 “It is what it is. That’s her car out there and, well, that’s her right there.”

Jeremy looks at the woman again. There’s a few flies dipping in and out of the back of her skull.

“What happened to her?”

I feel a little uncomfortable. I wasn’t really planning to lay it all out like this.

“Well, I hate to say this but I killed her.”

Jeremy nods slowly. He’s starting to take this in and I’m relieved.

“Don’t ask me why. Anything I say is just gonna sound ridiculous.”

I rub my hand in my hair. I want to appear frustrated.

“Things just got out of control.”

Bob Clark owns the Self Serve in Cashtown Corners. It’s the only business there and Bob is the only resident. He’s never been comfortable around other people. Until he starts to kill them. And murder, Bob soon discovers, is magic.

People Live Still in Cashtown Corners is Bob’s account of a tragedy we all thought was senseless.

There is a point at which you find yourself, where, and this is not just what I think but this is the way we are designed to think and it’s this: if the entire universe, and I mean every corner of every atomized corner of infinity; if everything that is isn’t aware of or doesn’t understand my most inconsequential, half-formed thoughts, then there is no chance that the highest-formed acts by the noblest mind are greater than gross self-love.

People Still Live in Cashtown Corners is the product of a literary mind that regularly licks at 12 volt batteries charged with pure insanity. –Aaron Allen, Horror in the Hammer.

Bob Clark . . . is clearly unhinged. Yet it is his voice, with its plain-spoken common sense, that draws us into the story and is so convincing that we almost don't question the peculiarity of his perspective. Until the murders begin to multiply, of course . . . a most disturbing read.–Kerry Clare, The Globe and Mail.

California Book Award-winner Greer presents a hilarious and immaculately written story set in L.A., exploring the inevitability of failure. The Failure is a picaresque novel set in Los Angeles about two guys who conceive and badly execute a plan to … Continue reading →

David Kellgren is a process server, a job where everyone wants to kill the messenger and things can get a little bit dangerous and out of hand. David is attacked when trying to serve legal papers to a gang member … Continue reading →

Thought You Were Dead

Meet the Perfect Man…no, no he’s not the hero of Thought You Were Dead. That would be Chellis Beith, literary researcher, slacker, reluctant detective, and a man bedeviled by every woman in his life. There’s his lost love, Elaine Champion, … Continue reading →