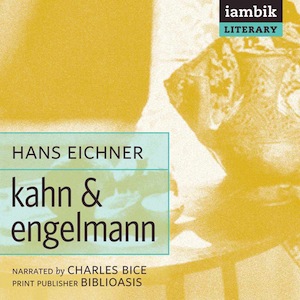 A bestseller in Germany and Austria, the English translation of Kahn & Engelmann was published to great critical acclaim. The novel tells the story of a Jewish family from rural Hungary, their immigration to Vienna in the great days of the Austro-Hungarian Empire, their loves, business ventures and failings, and their eventual tragic destruction. Narrated by one of the characters, Peter Engelmann, who wishes only to forget his past, this highly original novel recreates a vanished Vienna with salty humour and humanity. In a voice which is appealing without being sentimental, Peter describes his escape from the Nazis through snowy woods, his attempts to start a new life in England and Canada, and his decision to immigrate to Israel. Written by an eminent scholar, himself a survivor of Nazism, Kahn & Engelmann is both an entertaining novel and a major work of Holocaust literature.

In the summer of 1938, a Jewish refugee is going for a walk on Carmel Beach.

[This book] sits well among other books describing this period by authors such as Thomas Mann or Stefan Zweig. --A Common Reader - Read More

Eichner is a true Jewish story teller, in every sense. Eichner’s amazingly, beautiful, word paintings radiate throughout the pages. His insight into Jewish life and Jewish guilt is profound. His fondness for Jewish humor shines through, as he injects it throughout the novel, through Jewish jokes, stories and fables. -- Rayna Eliana - Read More