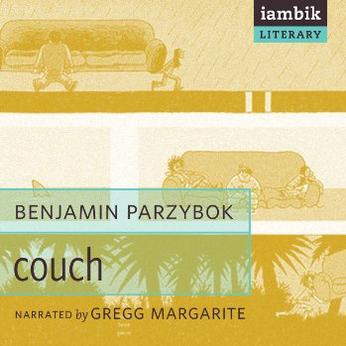 Couch. A novel. An odyssey. An epic furniture removal. A road trip. An exuberant and hilarious debut in which an episode of furniture moving gone awry becomes an impromptu quest of self-discovery, secret histories, and unexpected revelations.

Thom is a computer geek whose hacking of a certain Washington-based software giant has won him a little fame but few job prospects. Erik is a smalltime con man, a fast-talker who is never quite quick enough on his feet. Their roommate, Tree, is a confused clairvoyant whose dreams and prophecies may not be completely off base.

After a freak accident floods their apartment, the three are evicted—but they have to take their couch with them. The real problem? The couch—huge and orange—won’t let them put it down. Soon the roommates are off on a cross-country trek along back roads, byways, and rail lines, heading far out of Portland and deep into one very weird corner of the American dream.

Get A Reader’s Guide and Companion to Couch on Scribd.

From above, from a thousand feet up, an eagle’s-eye view, it’s a strange spectacle still. A six-legged insect, stiff and ungainly, too long on the grape vine gone to vinegar.

“Beyond the good old-fashioned story, Couch meditates on heroism and history, but above all, it’s an argument for shifting your life around every now and then, for getting off the couch and making something happen.” —The L Magazine

“What I like about the novel is its epic scope and the constant, unapologetic insistence that there is something magical about this inanimate piece of furniture.” —Andrew McCarthy

This is the second book of the Elemental Logic series, preceded by Fire Logic. Earth * Air * Water * Fire A sweeping drama of war, intrigue, magic, and love. With Earth Logic, Laurie J. Marks continues the epic of her … Continue reading →

This is the first book of the Elemental Logic series. The second book is Earth Logic. Earth * Air * Water * Fire These elements have sustained the peaceful people of Shaftal for generations, with their subtle powers of healing, … Continue reading →

The neo-fascist armies of the Liberator have swept across the Americas like a plague. Montreal is in flames, and the front is less than a kilometre away. Seventeen year-old Private Joanie Morgernstern can expect no mercy from the victors. As … Continue reading →

Perdido is the second book of the Guadalupe Series. Madewell Brown walked into the village on a hot, dry day in 1946. A solitary black man with one arm longer than the other, he had never found a place for himself. … Continue reading →

Jennifer Stevenson’s debut novel starts with Raedawn Somershoe who lives in a trailer on the banks of the Fox River. She likes men and men like her. It runs in the family: her mother, Gelia, can seduce a man just … Continue reading →