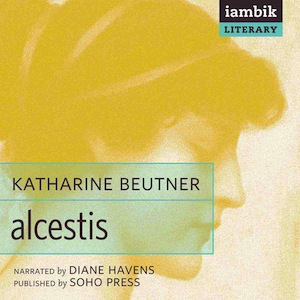 In Greek myth, Alcestis is known as the ideal good wife; she loved her husband so much that she died to save his life and was sent to the underworld in his place. In this poetic and vividly-imagined debut, Katharine Beutner gives voice to the woman behind the ideal, bringing to life the world of Mycenaean Greece, a world peopled by capricious gods, where royal women are confined to the palace grounds and passed as possessions from father to husband. Alcestis tells of a childhood spent with her sisters in the bedchamber where her mother died giving birth to her and of her marriage at the age of fifteen to Admetus, the young king of Pherae, a man she barely knows, who is kind but whose heart belongs to a god. She also tells the part of the story that’s never been told: What happened to Alcestis in the three days she spent in the underworld before being rescued by Heracles? In the realm of the dead, Alcestis falls in love with the goddess Persephone and discovers the true horror and beauty of death.

They knew the child’s name only because her mother died cursing it, clutching at the bloodied bedclothes and spitting out the word as if it tasted sour on her tongue.

"Beutner renders her multilayered heroine with beauty and delicacy, and concerns herself with no less than the intricacies of the soul…"—Publishers Weekly

"Beutner has elevated a relatively minor character in Greek mythology to a major player…In this reworking of the classic legend, a decidedly more complex and restless Alcestis is provided with an intriguing backstory involving her childhood and the untimely death of her favorite sister, Hippothoe…Beutner spices up this classic tale with a decidedly Sapphic flavor."—Booklist

“Powerful, despairing … Beutner has taken loss and sadness, sharpened them, and shaped them into a tale at once profound and daring in what it refuses to give its readers. This is the dawn of an extremely promising career.” — Open Letters Monthly