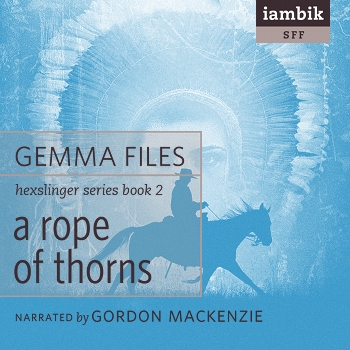 A Rope of Thorns

You must let blood to get blood.

New Mexico, 1867. As consort to resurrected Mayan goddess Ixchel, hexslinger “Reverend” Asher Rook has founded “Hex City,” the first place in all of human history where magicians can live and work together safely. But this tenuous peace is is threatened by the approach of Rook’s former lover, Chess Pargeter, bent on revenge over Rook’s betrayal, as he kills his way toward the very same spot, dragging Pinkerton agent-turned-outlaw Ed Morrow along with him. Because Chess, sacrificed in Ixchel’s name, has become far more than just a hex: his very presence has torn a crack in the world, remaking everything around him. And as the cycle of Chess’s power approaches its climax, Chess, Morrow, and a young spiritualist named Yancey Colder—caught up in Chess’s vendetta—will all have to shed yet more blood as they face down his mysterious patron demon, known only as the Enemy . . . along with every other enemy Chess has already made along the way.

This sequel to A Book of Tongues paints a stark, vivid, and gory picture of the 'wild west' in the years following the Civil War. . . . Filled with antiheroes, sacrificial victims, and supernatural beings, Files’s latest is not for the squeamish but should delight fans of gothic Western fantasy and Central American myths. –Library Journal - Read More

For those who yearn for the next Harry Potter-like series, be warned; the brave and resourceful Harry would have been dead and his body desecrated and defiled within five minutes in Files' universe. . . . Where is Files going with all this? I cannot tell, except that the finale will no doubt be apocalyptic in scope, a battle which will make Potter's last stand at Hogwarts seem a slap fight between fifth graders. –Corey Redekop, Shelf Monkey - Read More

A Book of Tongues

The neo-fascist armies of the Liberator have swept across the Americas like a plague. Montreal is in flames, and the front is less than a kilometre away. Seventeen year-old Private Joanie Morgernstern can expect no mercy from the victors. As … Continue reading →

God Emperor of Didcot is the second book of the Chronicles of Iambard Smith. Tea… a beverage brewed from the fermented dried leaves of the shrub Camellia sinensis and imbibed by all the great civilisations in the galaxy’s history; a source of … Continue reading →

Wrath of the Lemming-Men is the third book of the Chronicles of Isambard Smith. From the depths of Space a new foe rises to do battle with mankind: the British Space Empire is threatened by the lemming-people of Yull, ruthless … Continue reading →

Couch. A novel. An odyssey. An epic furniture removal. A road trip. An exuberant and hilarious debut in which an episode of furniture moving gone awry becomes an impromptu quest of self-discovery, secret histories, and unexpected revelations. Thom is a … Continue reading →