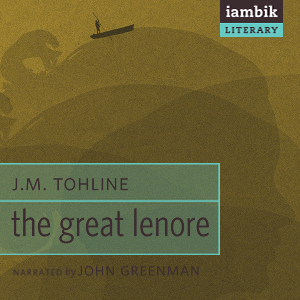 The Great Lenore is the tale of a ravishing young Brit whose falsely-reported death provides her with an opportunity to begin a new life. Before she can disappear for good, however, she longs to know the reaction of her two-timing husband and his aristocratic family. To find out, Lenore enlists Richard – an outsider in the money-and-booze sodden landscape of Nantucket high society – to be her eyes and ears. As events unfold, Richard discovers the entanglements of Lenore’s relationships are more intricate than he ever expected – more intricate even than the secrets within Lenore’s miniature punt boat.

This elegant debut paints an idyllic island surrounded by reflective seas and encased in a world where souls collide, mysteries thicken, and dreams unravel. With lively, modern prose reminiscent of The Jazz Age, Tohline orchestrates a playful literary riff on affluence, love, grief, and duplicity. In the author’s words, ”[It] is about dreams, and about the things we sacrifice to chase them.”

When I met Lenore, she’d been dead for four days.

"The Great Lenore is...beautiful in the same way that J.D. Salinger's books are beautiful...[it] hangs in your consciousness after the last note has sounded, making it impossible for long moments to think. One just feels." --New York Journal of Books

"The Great Lenore...[presents] mysteries about every character. Some are revealed, some not...so you're saying, 'Okay, what is this person's motivation?' The mind tends to think of these formulas. [But] there's no formula here." --KWGS Tulsa [Tulsa's NPR affiliate]

"The Great Lenore is perfect when you want to get absorbed in a book. It doesn't so much take you away as take you into itself." --Erin Reads

"The Great Lenore is...a page-turner that introduces the literary world to an author with a clear and profound appreciation for the American literary canon." --Small Press Reviews

"The Great Lenore...stylistically mimics the crashing waves of the Nantucket ocean...[it] kept me turning the pages until I knew all of the details." --Booked In Chico

Buy the print book on Amazon.com
iTunes
Visit the book page on Indiebound
Buy this title on Audible.com