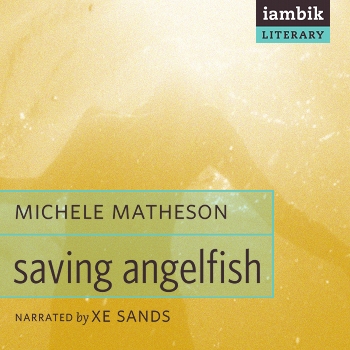 A part-time actress and full-time junkie, Maxella Gordon’s life is unraveling fast. She’s estranged from her parents, in debt to the neighborhood dealer, and in frequent conversation with an angel figurine she ripped off from the local Rite-Aid. After an unfortunate incident, Max is forced to sell for another dealer, the vicious, legless Carlotta. Struggling to get out of debt, off drugs, and away from Carlotta, Max is increasingly desperate to find a way out.

Drugs and violence haunt everyone in Max’s world, yet still they draw together: her parents, still holding each other up though their marriage ended years ago; her tutu-clad buyer, who joins them for Christmas dinner; and Max’s own attempt to help Carlotta’s son Albert break away from his mother.

Honest and unpredictable, laced with flashes of wit and poignancy, Saving Angelfish is a gritty portrait of the dark world simmering just below LA’s gleaming surface.

Max lies on the beach with one night clean.

Matheson's promising debut, a gritty novel from Tin House Books' New Voice Series, tells the bleak story of a wayward L.A. junkie named Max. Virtually disowned by her dysfunctional parents, out of a job, sickeningly underweight, months behind on rent and unable to kick her debilitating heroin habit, Max flits from day to depressing day in a constant state of decrepitude. When she's not shooting up, she's snorting coke, and when she's not doing that she's thinking about her next fix. Despite her spiraling decline and a number of near-death experiences, nothing really changes for Max throughout her story. Her dealers (Grandpops, her crusty, repulsive landlord; and Carlotta, a beastly legless woman) and fellow junkies (Wolf and a roller-skating waif named Tutu) share Max's single-minded pursuit of getting high. Though initially mesmerizing, the drug-centric plot begins to ware a little thin; the crux of the book can be found in Max's unchanging attitude toward her life: "The goal is not to think-about anything. She winds up places, and that's fine." Nonetheless, Matheson's sharp, highly detailed prose thrusts readers in the driver's seat of an out-of-control life. - Publishers Weekly

"This is a flawlessly executed study of a life that's fully dissolved." - Los Angeles Times

"Her novel of addiction, of coming close to bottoming out…rings as true as any memoir I've read." - Russ Harvey, KQED

The Lamentations of Julius Marantz

Who would benefit if they really did bring The Rapture on? Marc Estrin follows another of his strange protagonists through a world troubled by what it knows and by how it applies that knowledge. From the first page, we are … Continue reading →

Nine-year-old Phineas William Walsh has an encyclopedic knowledge of the natural world. He knows that if you wet a dog’s food with your saliva and he refuses to eat it then he’s top dog, and he knows that dolphins can … Continue reading →

The Edge of Eden

Life starts to unravel for Penelope when her husband, Rupert, drags their family to the remote Seychelles islands for an exotic diplomatic job in 1960. While Penelope pines for London, Rupert and their two daughters fall in love with this … Continue reading →

A funny, urban love story, Homing is the story of Leah, a woman who’s grown afraid of the outdoors; a ghost that’s lost its way; a musician who’s trying to find his; and Sandy and Harold, a pair of homing … Continue reading →

Jennifer Stevenson’s debut novel starts with Raedawn Somershoe who lives in a trailer on the banks of the Fox River. She likes men and men like her. It runs in the family: her mother, Gelia, can seduce a man just … Continue reading →