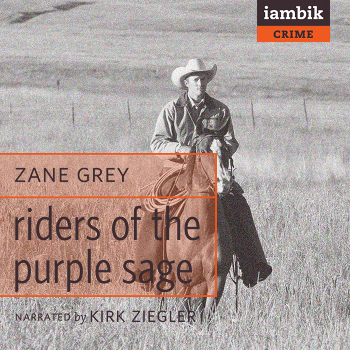 Riders of the Purple Sage

Riders of the Purple Sage is a Western novel by Zane Grey. Considered by many critics to have played a significant role in shaping the formula of the popular Western genre, the novel has been called “the most popular western novel of all time.”

Riders of the Purple Sage tells the story of Jane Withersteen and her battle to overcome her persecution by members of the polygamous Mormon Church, a leader of which, Elder Tull, wants to marry her. Withersteen is supported by a number of Gentile friends, including Bern Venters and Lassiter, a famous gunman and killer of Mormons. Throughout most of the novel she struggles with her “blindness” in seeing the evil nature of her church and its leaders, trying to keep both Venters and Lassiter from killing her adversaries, who are slowly ruining her.

Through the adoption of a child, Fay, she abandons her false beliefs and discovers her true love. A second plot strand tells of Venters and his escape to the wilderness with a girl named Bess, “the rustler’s girl,” whom he has accidentally shot. While caring for her, Venters falls in love with the girl, and together they escape to the East, while Lassiter, Fay, and Jane, are pursued by both Mormons and rustlers.

A sharp clip-crop of iron-shod hoofs deadened and died away, and clouds of yellow dust drifted from under the cottonwoods out over the sage.