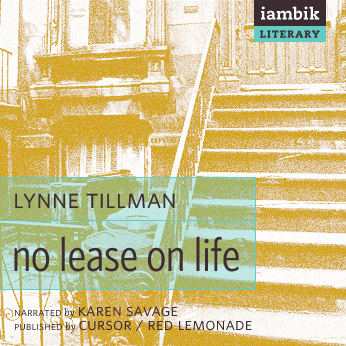 No Lease on Life

The East Village streets are overrun with crooked cops, drug addicts, pimps and prostitutes. Garbage piles up along the sidewalks amid the blaring soundtrack of car stereos. Confrontations are supercharged by the summer heat wave. This merciless noise has left Elizabeth Hall an insomniac. Junkies roam her building and overturn trashcans, but the mean-spirited landlord refuses to help clean or repair the decrepit conditions. Live-in boyfriend Roy is good-natured but too avoidant to soothe the sores of city life.

Though Elizabeth fights on for normalcy and sanity in this apathetic metropolis, violent fantasies threaten to push her over the edge. In vivid detail, she begins to imagine murders: those of the “morons” she despises, and, most obsessively, her own.

Frightening, hilarious, and wholly addictive, No Lease on Life is an avant-garde sucker-punch, a plea for humanity propelled by dark wit and unflinching honesty. Tillman’s spare prose, frank, poignant and always illuminating, captures all the raving absurdity of a very bad day in America’s toughest, hottest melting pot.

Cover image adapted from a photo by madabandon.

"Confirms and enhances her reputation as one of America's most challenging and adventurous writers." — Guardian

“ … should be awarded a special Pulitzer for the most perfect use of the word “moron” in the history of the American novel." — Fran Lebowitz

“[Elizabeth] neither recoils nor romanticizes … She’s a character who stays with you after you put the book down—a creature of occasional dark impulses, intermittent grumpiness and perennial willingness to pull up her socks and deal.” — David Gates, New York Times Book Review