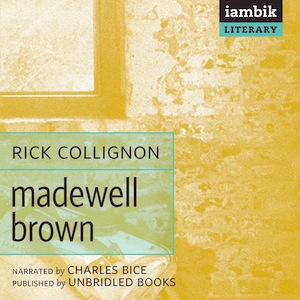 Madewell Brown is the fourth book of the Guadalupe Series.

As recorded in Rick Collignon’s second novel, Perdido, a tall black man with one arm longer than the other walked into Guadalupe, New Mexico one morning about 50 years ago, stayed pretty much to himself for seven years, and then walked back out of town. No one knew who he was or what became of him. Now, as his last act, an old man named Ruffino Trujillo tells his grown son Cipriano a story about what became of the black man. After Ruffino’s death, Cipriano discovers an old canvas bag bearing the name of Madewell Brown. Inside are a hand-carved doll, an old blanket, an unlabeled photo of a Negro League baseball team, and a small, yellowing envelope that was never posted. Thinking it the least he can do, Cipriano mails the letter.

When it arrives in Cairo, Illinois, it comes into the hands of a young woman named Rachael, who believes it is from her lost grandfather. She believes this because of all that she’s been told by the raggedy old man who taught her everything: Obie Poole, who was Madewell’s friend and the orphaned Rachael’s anchor, the man who gives this eloquent novel its authentic sense of history lived. Drawn magically forward on Rick Collignon’s direct and haunting prose, we follow Rachael to Guadalupe in search of her own identity and we watch as Cipriano tries to make sense of the story his father told him about a dead man who didn’t belong there.

This fourth installment in Collignon’s beloved Guadalupe series is as magical as its predecessors, as emotionally honest, as surprising—and it firmly establishes Rick Collignon as a master American storyteller.

The day Rufino Trujillo was to die of a bad heart, he was standing before the window in his kitchen, drinking his morning cup of coffee. He was still wearing his long underwear.

I absolutely loved this book; I especially loved the style and the authors prose. I am now impelled to read the first three books of the Guadalupe series. -- Andra Tracy, Out Word Bound Books, Indianapolis, IN

Collignon knows Northern New Mexico, the land and its people, like the back of his hand. His writing is exquisite and his characters will touch your heart. -- Susan Wasson – Bookworks, Albuquerque, New Mexico