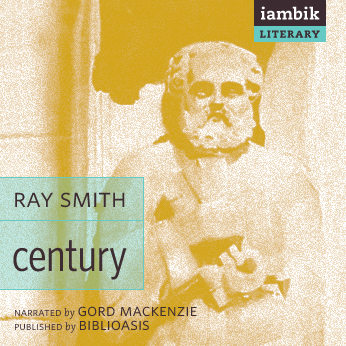 The fourth title in Biblioasis’s Renditions Series, Century begins with the nightmare visions of a young woman named Jane Seymour, catching the reader up in a chronicle of the Seymour family that moves from Austria, America and Africa, through Edinburgh and Venice, and then back through the Paris of the Belle Epoque and forward to 1923 Germany. Terrifying, powerful, slashing and satiric, yet at the same time musical and wonder-filled, Century remains the most important work of Ray Smith’s oeuvre, and one of the most impressive, and far-reaching novels ever published in Canada.

In the night, Heinrich Himmler came to her as she lay waiting for sleep.

"In a long – and, to be honest, wildly uneven – career Smith has written some of the most truly original books ever published in this country. It’s hard to think of another writer we have who has pushed the form of the novel as far, and few whose best work so demands our attention." --National Post - Read More

"Century is an engaging book to read...the contrast between its own literary beauties and its pessimistic implications echo the inability of its characters to combine beauty and value." --Books in Canada

A bestseller in Germany and Austria, the English translation of Kahn & Engelmann was published to great critical acclaim. The novel tells the story of a Jewish family from rural Hungary, their immigration to Vienna in the great days of … Continue reading →

Madewell Brown is the fourth book of the Guadalupe Series. As recorded in Rick Collignon’s second novel, Perdido, a tall black man with one arm longer than the other walked into Guadalupe, New Mexico one morning about 50 years ago, stayed … Continue reading →

The Painting and The City

What is the secret contained in Philip Schuyler’s painting? Who was the woman he depicted, the innocent woman and her dark stalker? The Kreunen sisters know, but they must re-bury the past. And Jacob Lerner, artist flailing in a sea … Continue reading →